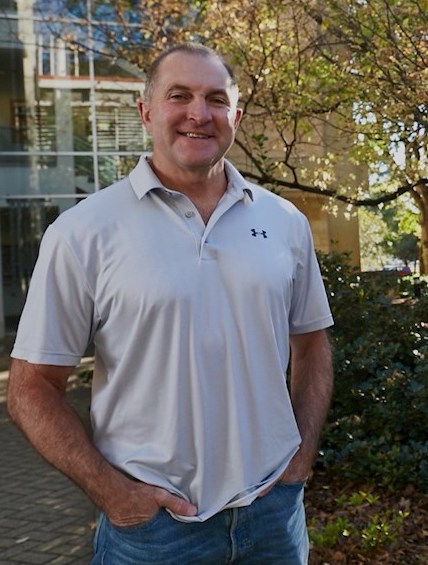 2009- : Sleep regulation in ostrich.
Collaborators: A Fuller, D Mitchell (S Africa), J Lesku, N Rattenborg (Germany)
Why animals sleep is not known. There are many theories from energy balance to memory consolidation. The team at the Max Planck have been taking a comparative approach to the problem, looking at how different species, with different life histories and ecologies, regulate their sleep. This work has involved fitting ostrich with state-of-the-art loggers to measure brain temperature and EEG when they are released into the wild, and on occasion, deprived of sleep. Data analysis is ongoing.

2007- : Adaptive thermogenesis in mammals
Collaborators: D Blache (UWA), I Clarke, B Henry (Monash)
It is obvious that there is huge individual variation in the way mammals (including humans) respond to overfeeding – some increase energy expenditure and gain a fraction of the mass seen in individuals that do not increase expenditure. Using sheep selected for temperament as a model, we are studying whether brown fat contributes to adaptive thermogenesis in adult sheep (with implications for adult human) and whether animal temperament influences the propensity to gain weight. Data analysis is ongoing.

2007- : Heat balance in humans – the effect of climate change on human activity
Collaborators: C Forbes
While several health impacts of climate change have been widely reported, there has been no discussion of how human physical activity will be impacted. We have used two different models of human heat balance to address the issue, one established and one developed by us. Using 10 years of meteorological data for Perth, we calculate the daily heat balance of people engaged in various activities, ranging from rest to physical labour. We assess for each day (i) whether sweating is required for heat balance (with impacts for hydration), (ii) whether heat balance is possible or whether heat will be stored, i.e. body temperature will increase, and (iii) whether dangerous heat storage likely to precipitate heat stroke will occur. We then run the same models adjusted for CSIRO predictions of temperature increase by 2030 and 2070. Our results provide evidence that whereas there are presently 3 or 4 days a year when outdoor activity is compromised by heat load, there will be up to 30 days per year if the predictions of CSIRO about likely temperature increases are accurate.

2003-2006: Brain temperature regulation in mammals: mechanisms and consequences.
Collaborators: D Mitchell (S Africa); D Blache (UWA)
Mammals detect increases in body temperature predominantly in the brain. Counterintuitively, many mammals selectively cool the brain during heat stress, apparently defeating the mechanism for inducing cooling responses. We are investigating this apparent anomaly, which we believe is concerned with optimising water use in hot conditions. The recent focus has been the mechanisms of brain temperature regulation and whether there has been convergent evolution in thermoregulatory strategies in the eutherian and marsupial lineages.

1999- : Thermal physiology and ecology of large African bovids
Collaborators: D Mitchell, A Fuller (S Africa)
What began in the late 1990’s as interesting research into the thermal physiology of African bovids has become topical as South Africa faces the possibility of its tourism industry being decimated as its iconic species become extinct due to climate change. Our research investigates the physiological and behavioural mechanisms that animals use to maintain homeothermy, the plasticity in these mechanisms, and the potential for heterothermy.

2005-2008: Thermal physiology of large mammals inhabiting a hyper-arid desert
Collaborators: D Mitchell, A Fuller, R Hetem (S Africa), M Shobrak (National Wildlife Research Centre, Saudi Arabia)
Knowledge of the way mammals cope with the extremes of aridity and heat can provide insight into the possible responses to selective pressures in other mammals as climate change ensues. We studied, for one year, the body and brain temperatures, activity patterns, and microclimate selection in Arabian Oryx and Sand Gazelle in the Saudi Arabian desert. Both species underwent periods of heterothermy but these periods were probably induced by dehydration and restricted energy intake. The activity pattern was quite plastic, providing the possibility that more mesic species can adapt by altering activity patterns.

1998- : The physiology of avian fever
Collaborators: D Gray (S Africa)
While the processes of immune activation and the acute phase response, including fever, are well characterised in mammals, very little is known about birds, despite the security threat posed by avian influenza. Our research has been aimed at characterising the acute phase response, and the mediators of that response, using the Pekin duck as our model. We have shown that the response to Gram-negative infection is unimodal and proportional to the challenge imposed, and that steroids mediate the response. The latter may help explain the very different responses of restrained and free-ranging birds to identical immune stimuli, a finding that has implications for the way research is conducted.

1999- : Thermoregulation and energy balance in marsupials
Collaborators: TJ Dawson (UNSW), A Munn (U Syd), P Withers (UWA)
Homeothermy probably preceded the split that gave rise to the marsupial and eutherian mammals, but there are some differences in the mechanisms used to achieve it. We have been studying those mechanisms in the laboratory and the patterns of body temperature in the wild. Studies of how kangaroos respond to heat load is important because they are nocturnal and so exposed to heat load during the resting phase of their nychthemeral rhythm, in contrast to most bovids that are diurnally active. We also study of the effect of coat physical properties on radiant heat load, leading to the conclusion that selection for different phenotypes of coat colour is a potential means of adaptation to climate change.

2003- : Scrotal thermoregulation and the physiology of the tunica dartos muscle
Collaborators: Bakker (UWA)
Elevated testicular temperature in scrotal mammals results in infertility. The action of the tunica dartos muscle of the scrotum was thought to be mediated via a central reflex involving afferents from the scrotum and sympathetic efferents to the muscle. We have shown that it is at least partially mediated by a local thermosensitivity of the muscle. Research continues into the mechanisms of this smooth muscle’s responses to temperature change, and the implications of scrotal temperature dysregulation for the endocrine function of the testes.

2001- : Homeothermy and brain temperature regulation in baboons
Collaborators: Mitchell, Fuller (Wits)
There is much debate concerning potential clinical implications of ‘selective brain cooling’ in humans, but it is impossible to make the measurements required to settle the debate. On this basis we studied the phenomenon in a species that shares the morphology of the cranial blood supply with humans. We showed conclusively that the primate cerebral anatomy cannot support selective brain cooling. As a side study, we also showed that radiant heat was not a significant stressor to the quadrupdal baboons, which helped to shed light on some theories regarding the evolution of hominin bipedalism.

2003- : Heat stress in cattle and sheep
Collaborators: A Barnes, D Pethik, D Beatty, C Stockman (Murdoch)
Taking production animals from temperate Australia across the equator during live export presents the animals with a degree of thermal stress. We have studied ways to ameliorate strain and improve welfare during live export. We began by characterising the physiology of chronic exposure to thermal stress, where acute stress had only been studied previously, and provided evidence that an electrolyte supplement could reduce the impact of thermal stress.

2006- : Using fever to detect disease transmission in rabbits
Collaborators Saunders, McLeod (Dept. Primary Industries, NSW), White (University of York), Hutchings (Scottish Agricultural College)
Rabbit Haemorrhagic Disease Virus has been extremely effective as a mechanism to control rabbit populations in some areas of Australia, but less effective in others. Large-scale differences in its effectiveness seem to be linked to climate. However, there are also more local-scale variations that cannot be explained by bioclimatic factors. Fever occurrence in rabbits, as detected by implanted temperature loggers and paired with proximity collars logging contact between individuals, might provide an assessment of disease transmission and these variations at different scales.

2004-2006: Giraffe hemodynamics
Collaborators: Mitchell G (Wyoming), Mitchell D (Wits)
An old and ongoing problem in comparative physiology is how giraffe have adapted to the physical stresses posed by their morphology, especially gravitational stress. Specifically, we were interested in how hydrostatic pressure is overcome to perfuse a brain two metres above the heart. Our specific hypothesis was whether a siphon system could operate between the jugular veins and the carotid arteries. We showed clearly that it could not.

My field of research is comparative physiology. My research objective is to identify and explore the physiological mechanisms used by organisms (mainly mammals and birds) to adapt to environmental stressors. My principal area of focus is thermal physiology, particularly the regulation of brain temperature, and the consequences of strategies used by animals to maintain thermal homeostasis.

Because my curiosity is easily aroused in an interesting problem, our lab has collaborations in diverse areas. Recent examples are work in fields as diverse as giraffe hemodynamics, alpaca nutrition, and animal ethics and welfare. But the underlying theme is constant – a desire to understand how animals work (to borrow a term from Knut Schmidt-Nielsen).

Amplitude of the circadian rhythm of temperature in homeotherms

Circadian rhythm: together we tick

TPCHRF - Round 4 - The CIRCA DIEM Trial: Reintroducing circadian cues to decrease length of stay, improve growth and metabolic outcomes in preterm neonates.