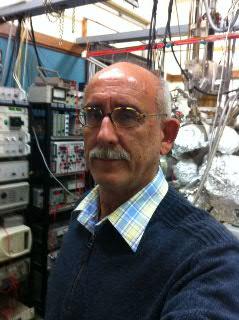 PROJECT TITLE: Complete scattering experiment on surfaces for studying electron entanglement.
AIMS AND BACKGROUND
Quantum entanglement, also called the quantum non-local connection, is a property of the quantum mechanical system containing two or more objects, which are linked in a way that one cannot adequately describe the quantum state of a constituent of the system without full mention of its counterparts, even if the individual objects are separated. This property, also known as “quantum correlation”, became the most discussed issue in quantum physics since the publication by A. Einstein, B. Podolsky, and N. Rosen (EPR) of their paper “Can Quantum-Mechanical Description of Physical Reality Be Considered Complete' ?” [Einstein 1935].
Entanglement is at the heart of the much discussed quantum information science and has practical relevance for the understanding of correlation-driven phenomena, transport properties, and phase transitions in composite quantum systems. Entanglement is understood today as one of the quantum world’s most important and glaring properties [Malte C Tichy 2011]. It contradicts the intuitive assumption that any physical object has distinctive individual properties that completely define it as an independent entity and that the results of a measurement on one system are independent of any operations performed on another space-like separate system, an attitude also known as local realism.
We aim in our project to create, analyse and manipulate two-electron entangled states generated by an electron impact from a solid surface. Tuning the experimental arrangement it is possible to pick up only the entangled electrons and perform operations that depend solely on their quantum entanglement in a similar way as has done for photons. To the best of our knowledge it would be the very first time that such an experiment is performed despite the enormous efforts world-wide to generate and manipulate entangled states. The basis for the successful completion of this goal is our previous experiments on spin-resolved detection of single electron pair from ferromagnets, an experiment widely acknowledged as one of the toughest in experimental solid state physics, due to the extremely long acquisition time under ultrahigh vacuum. The experiment is backed by theory that also was able in the past to simulate electron pair emission from surfaces. The novel aspect of this project is our mission to filter and manipulate only those electron pairs that are entangled in the sense of quantum information.
Aim of the project in details:
Investigate entanglement of correlated electron pairs generated in a complete spin-polarized scattering experiment from various solid surfaces. To reach this ultimate aim we are planning to perform the following experiments:

systematic measurements of the change of electron spin while scattering of the electrons from various (magnetic, nonmagnetic, semiconductor) surfaces; we’ll compare how the polarization of the incident electron beam changes in elastic and inelastic electron scattering with energy losses for individual and collective excitations;
calibrate “spin rotator” to enable the manipulation of the spin state of the flying electrons by applying proper magnetic field;
analyse correlated electron pairs in coincidence experiment;
compare the generation of entangled electron pairs in a scattering experiment from various surfaces:
- creation of electron pairs by scattering from non-localised valence electrons of a ferromagnetic metals (exchange effect is used to control spin entanglement);
- creation of electron pairs by scattering from high-z nonmagnetic metals (spin-orbit interaction is used to control spin entanglement);
- pair generation from localised electronic states of adsorbed atoms and molecules.
Background is considered for the above-mentioned aim and then for the relationship of proposal to work in the field and international progress.
Quantum information uses quantum mechanical laws for its generation, coding, processing, etc. Quantum information (computing and communication) in analogy to classical computing needs “bits”. “Bit” in quantum information is a quantum system, which has, at least, one observable requiring two-, or higher-, dimensional space for its characterization. It is called “qubit” [Schumacher 1995]. Quantum communication seems to be more feasible than quantum computing with the presently available technology. One of the fundamental resources for many applications in quantum communication are pairs of entangled particles (or qubits) [Ekert 1991]. Well-known examples of maximally entangled states of two qubits are the spin singlet and triplet (with mz = 0) of two spin-1/2 particles.
In quantum optics, the non-locality and completeness of quantum mechanics and quantum teleportation with photons have been investigated theoretical and experimentally [Aspect 1982; Bouwmeester 1997; Boschi 1998], while so far, no corresponding experiments for electrons (especially in a solid state environment) are reported. This reflects the fact that it is very hard to produce and to measure entanglement of electrons.
Although a photon is an excellent carrier of information, it is, however, not suitable for its long-term storage. Also, a photon is immediately destroyed as soon as one tries to detect it. For these and other similar reasons, it will certainly be desirable to produce entangled states of two qubits (qudits) made of electrons, atoms, molecules, etc..
Most of the prototypes of quantum computers are based on the “electronic qubits” – coupled two-electron states in a solid matrix, i.e. electrons in quantum dots [Burkard, 2001].

- Kristen Feher (2001) assisted with the design, manufacture, installation and calibration of magnetic field “Helmholtz coils” to annul local magnetic fields within the laboratory. The project was unique because the coils were rectangular and located in three pairs along the corner edges of the laboratory. Annulment to about 20 milligauss was achieved.

- Dane Lance (2002) was involved in the construction of the spin-polarized two-electron spectrometer (that is a unique instrument, now operating and producing world-class experimental results). He demonstrated outstanding capabilities and was selected as one of few Australian students to attend Summer Scholl in Cambridge.

- Ranga Muhandiramge (2003) was working in the Centre for Atomic, Molecular and Surface Physics for two months during summer. He was involved in the construction of the vacuum system, calibration of the acquisition system and data processing. He demonstrated outstanding results in computing and data processing and was selected as one of few Australian students to attend Summer Scholl in Cambridge.

- Joel Boesfeld (2009) was working in CAMSP on revival of the ellipsometer together with the Endeavour Fellow visitor Debashi De. He demonstrated outstanding results in measurements and processing ellipsometric data of multi-layered structures.

- Samuel Moore (2012) was studying “gold black” films. He prepared himself these films by means of thermal deposition in special conditions, and then studied their optical properties.

- Richard Bentley-Moyse (2013) was studying deposition of metal films on silicon oxide and characterization of the films using optical methods.

1992 – First to observe the radiative capture of near-zero kinetic energy electrons by solid surface.
1995 – Participation in development of a new low-energy two-electron coincidence spectroscopy, (e,2e) in reflection geometry (with Prof Kirschner and Prof. Artamonov), Max-Planck Institute, Germany. Successful application of (e,2e) technique for studying electron scattering dynamics and electronic structure of surfaces.
1996 – First to observe plasmon assisted low-energy inverse photoemission phenomena.
1997 – First to observe the emission of two electrons following the absorption of a single photon in a valence band of metal (Cu, Ni, Fe) using Synchrotron Radiation Source BESSY.
The new phenomenon of the correlated electron pairs diffraction from crystal surfaces has been observed and investigated.
1998 - First spin-resolved (e,2e) experiment on a ferromagnetic solid surface (Fe(110)) using highly polarized incident electron beam (polarization 70-80%).
2001 - The new (e,2e) instrument for Surface Science applications was designed and built up at the University of Western Australia. The mechanism of secondary emission from LiF films deposited on Si(100) substrate and band parameters of the film were studied using (e,2e) spectroscopy.
2002-2003 Spin-polarized electron source was implemented in the time-of-flight (e,2e) spectrometer at UWA. Spin-orbit interaction in inelastic scattering of spin-polarized electrons from W(110) crystal was studied.
2004-2005 Anisotropy of spin-orbit interaction in W(110) was visualized using spin-polarized (e,2e) spectroscopy. Stoner excitations in ferromagnetic layers of Fe and Co on W(110) were studied using spin-polarized EELS.
2006 - Exchange correlation and spin-orbit interaction in Co film were observed and located in energy-momentum space using spin-polarized (e,2e) spectroscopy. Influence of a Ni buffer layer on structure and magnetic properties of Co film on W(110) were investigated.
2007-2008 Electronic structure of GaAs (100) and MgO(100) crystals was studied using spin-polarized two-electron spectroscopy.
2008 -2009 Spin-orbit effects in thin Au film on W(110) were investigated. Two phases of thin Fe film on W(110) surface were observed and their spin-dependent electronic structures were studied. Ferromagnetism of thin Au film on Fe layer was observed.
2010-2011 Observation of plasmon excitation by spin-polarized electron beam in thin Ag films on magnetic and non-magnetic substrates. Plasmon enhanced MOKE effect in magnetic nanostructures. Development of low-energy positron gun. Investigation of positron re-emission from various surfaces and various primary energies.
2012 - Spin-polarized Electron Energy Loss Spectroscopy was applied to study dependence of magnetic properties of Fe film on W(110) on film morphology and oxygen adsorption. Influence of kinematics on SPEELS was investigated. Azimuthal dependence of asymmetry of Stoner excitations in Fe film as well as azimuthal dependence of spin asymmetry of (00) diffraction beam from W(110) were studied.

Luminescence of SiO2 layers on silicon at various types of excitation

Emission of correlated electron pairs from surfaces induced by photons, positrons and ions