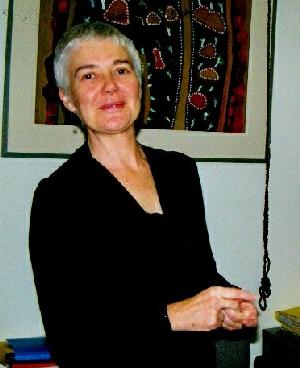 Professor Sandy Toussaint is an anthropologist, author and curator. A UWA academic staff member for 20 years, her research and teaching included applied and legal anthropology and contemporary social thought. She has worked with Australian Indigenous communities, families and organizations for more than three decades, most especially in the Kimberley region, on matters relating to cultural heritage, land, water and native title, family history, community engagement, health and medicine, material culture and exhibitions, and story-telling. Senior Research Officer for the Royal Commission into Aboriginal Deaths in Custody led in WA by Pat Dodson, the WA Aboriginal Land Inquiry, and Aboriginal Educations, Sandy is also a former Oxford Research Fellow, Trustee of the 1930s Kaberry Kimberley Collection at AIATSIS, and one of the co-founders and committee members of the RM and CH Berndt Research Foundation. A member of UNESCO’s Memory of the World Register for Australasia and the Pacific Committee, her books include Ngurntakura Wangki- Amy's Story with Annette Puruta Kogolo and Marminjiya Joy Nuggett (2014) and Kimberley Stories (2012). She has also authored refereed articles and book chapters, commentary and prose. Driven by practice-led collaborative cross-disciplinary work and cultural ethics, Sandy’s coordinating/curatorial work includes exhibitions such as Martuwarra Jila (Cullity Gallery 2003), Jimmy Pike's Artlines (Berndt Museum 2012, and national tour), Ngurntakura Wangki - Amy's Story (Gallery Central 2013), Warmun Then and Now (2015, Berndt Museum exhibition at the LWG), and Visual Story-Telling: Painting the Future (2017, Notre Dame University, Broome Campus). The Co-Trustee of the Catherine Berndt Estate is a key responsibility Sandy continues to hold. Actively guiding a time of transition, she managed the Berndt Museum at UWA between October 2013 and December 2015. Current research projects with others include a Kimberley and Wheat Belt Medical Review; the art, life and death of Revel Cooper; development of an exhibition/installation focused on the combined value of material culture, religion and science, and a major Kimberley project with desert Traditional Owners. Also affiliated with the University of Notre Dame, Sandy was the 2017 Scholar-In-Residence at the Nulungu Research Institute, Broome, Kimberley, and she is a member of the Vincent Arts Advisory Group in Perth.

"For the Children ... ": Aboriginal Australia, cultural access, and archival obligation

A letter to Catherine Berndt: Aboriginal cultural life and the preciousness of time

Toward Cultural Understanding: In conversation with Ted Snell about the Jimmy Pike's Artlines Exhibition at the Western Australian Museum, Albany

DP0346498 - ARF - Strang - Under Water: A Comparative Ethnographic Analysis of Water Use and Resource Management in Queensland and Western Austrralia