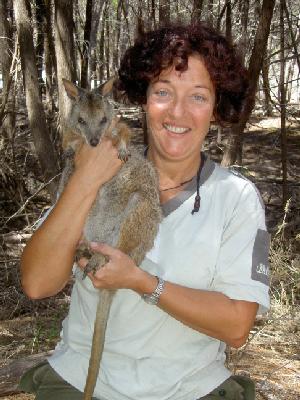 After completing a PhD on the physiology of lactation in sheep, I was appointed as an academic at The University of Western Australia in 1993. In 1995 I started developing new teaching programs in wildlife management and supervising postgraduate students with projects in wildlife conservation and management. It was one of these students, Dr Harriet Mills, who expressed an interest in a PhD project on the Dibbler (Parantechinus apicalis).
We started working together on the dibbler in 1997, when I became a member of the Dibbler Recovery Team and we were part of the expedition that collected the founders of a captive colony established at Perth Zoo. From this colony the Dibbler Recovery Team established a new population of dibblers on Escape Island, which considerably improved the conservation status of the species. My team investigated the island ecosystems inhabited by dibblers for over a decade,and this work culminated in the discovery that the availability of resources determines die-off in the males of this species.
The focus of my current research is on managing the negative effects of roads and other developments on wildlife.

My job involves teaching, research and service for The University of Western Australia.
I coordinate three postgraduate units and I supervise honours, Master and PhD students, mainly on wildlife research projects.
I also manage research grants and sit on committees and recovery teams for endangered and vulnerable species.

Methods to reduce the negative impacts of roads and development on wildlife.
Enhancing wildlife biodiversity in managed ecosystems.

My research on road ecology is mainly supported by Main Roads WA for projects on fauna crossing structures.
Thanks to their support I have been involved in the translocation and monitoring of western ringtail possums (Pseudocheirus occidentalis) during the construction of the Bunbury Outer Ring Road.
We also conducted projects on fauna along the Mandurah Entrance Road (now called Mandjoogoordap Drive), the Roe 7 Highway Extension, the Perth to Bunbury Highway (Forrest Highway) and, more recently, the Northlink Project.
I have also been involved in translocation projects of free range common brushtail possums (Thricosurus vulpecula)from the Perth Zoo Grounds to Whiteman Park, where we also studied the use of underpasses to connect two fenced reserves, and of black gloved wallabies (Macropus irma) from Jandakot Airport to Harry Waring Marsupial Reserve.
In the past I attracted grants from the Australian Research Council (ARC) for work on the dibbler (Parantechinus apicalis), on fertility control for wildlife management and for sheep milking research.
The Committee for the Advancement of University teaching (CAUT) and the Teaching and Learning Committee provided funds early in my career for the development of a computer simulated animal dissection (Animal Stack: a computer simulated animal dissection.

Other research projects conducted by my postgraduate students include:
Wildlife management of overabundant populations of marsupials (possums, kangaroos, rock wallabies) thorugh fertility control.
Influence of road kills on wildlife and use of underpasses by fauna.
Ecology of the quokka (Setonix brachyurus).

Road kills are a problem for both animals and people.
The average reported damage to a car for hitting a kangaroo is about $3000.
Our work aims at reducing road kills by researching the efficacy of amelioration measures such as underpasses for terrestrial fauna and rope bridges for arboreal marsupials like the critically endangered western ringtail possum.

Ecology and management of endangered marsupials and other threatened wildlife.
Methods of mitigating the negative effects of roads and other developments on wildlife, including underpasses and rope bridges. My major sponsor in this field is Main Roads Western Australia.

Spatial ecology of the quokka (Setonix brachyurus) in the southern forests of Western Australia: Implications for the maintenance, or restoration, of functional metapopulations

Demographic and genetic viability of a medium-sized ground-dwelling mammal in a fire prone, rapidly urbanizing landscape