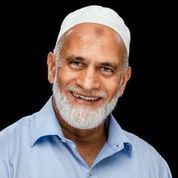 Nazim was born in Suva, Fiji. Once he had completed his early studies in Fiji, he came on a Commonwealth scholarship to UWA to study Electrical Engineering in 1976. Nazim later returned to Fiji in 1980 to work as a lecturer at the Fiji Institute of Technology. He returned to Perth and took up a position as Tutor in the School of Electrical and Electronic Engineering, here at UWA from 1986-1989 and also completed a BSc (hons) in Mathematics and Statistics. Nazim then completed his PhD in statistics in 2004. He has worked in several universities in Brisbane between 2002 and 2003 before returning to UWA in 2004 as Consultant/Lecturer.

Nazim is very active in statistical consulting and has delivered several short courses in statistics to various research groups and postgraduate students.

Review of Modelling and Simulating Crowds at Mass Gathering Events: Hajj as a Case Study

The flipped classroom with tutor support: an experience in a level one statistics unit

Accuracy of tablet splitting and liquid measurements: an examination of who, what and how

Time Series Modelling and Forecasting of the WA Prisoner Population