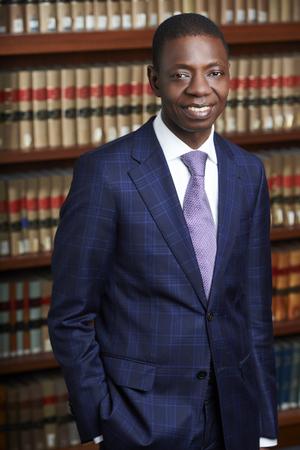 Dr Dominic Dagbanja joined the School of Law in August 2016. He has been a Research Associate at The University of Manchester School of Law in the United Kingdom working on the European Research Council grant’s research on the Sociology of Transnational Constitutional Law; Lecturer in Law at Ghana Institute of Management and Public Administration in Accra, Ghana; and Graduate Teaching Assistant at The University of Auckland Law School in New Zealand. He previously worked and practised law at Bentsil-Enchill, Letsa & Ankomah, Ministry of Justice & Attorney-General’s Department and Public Procurement Authority in Ghana. He was a Legal Assistant in the law firm of Gustavo Matheus, Esq. LLC in Maryland, Research Assistant at American Bar Association Section of Public Contract Law and Senior Intern at International Law Institute in Washington DC. His first teaching appointment was in 2001 at University of Ghana where he did his National Service as a Teaching Assistant in the Department of Sociology. There he handled tutorial classes in Theories of Social Development and the Context of Development and Underdevelopment for final year students

•Dr Dagbanja currently teaches Company Law and co-supervising a PhD on the constitution and investment protection by treaty in Australia.
•PhD in Law (International Investment Law)
•LLM in Government Procurement Law
•LLM in Transnational Business Practice
•Qualifying Certificate and Certificate of Enrolment on the Roll of Lawyers in the Republic of Ghana
• Bachelor of Laws
• BA in Sociology with Linguistics

The Law of Public Procurement in Ghana

Dr Dagbanja practised law in both the public and private sectors in Ghana. He was an Associate in the law firm of Bentsi-Enchill, Letsa & Ankomah and Assistant State Attorney in the Ministry of Justice and Attorney-General’s Department of Ghana. He also worked as a Senior Legal Officer at the Public Procurement Authority of Ghana.

Dr Dagbanja researches into International Investment Law and Arbitration, Public Procurement Law, International Trade Law, International Business Transactions and Commercial Law, Company Law and Contract Law. His particular interests are in the implications of treaty-based investment and trade regimes for public interest regulatory autonomy and the role of national constitutions and general international law in the execution, interpretation and enforcement of these legal regimes. More specifically, His research explores the implications of the investment treaty regime for domestic regulatory autonomy in the areas of human rights and environmental protection and the development policymaking and implementation. Dominic seeks to theorise around the subject of the limitations that the primary right and duty of states to regulate in the public interest (to protect environment and human rights and, initiate and implement development policies) must or should place on the competence of states to conclude investment treaties the terms of which tend to restrict such public interest regulation.

The Public Procurement Complaint and Administrative Review Mechanism in Ghan

The transnational political economy of African migration to Australia