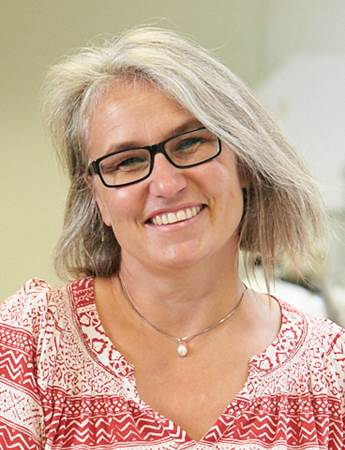 PhD (NTU), StaatsEx Pharm (UniTübingen)
Dr Locher holds a PhD in Natural Product Chemistry from the Northern Territory University (now Charles Darwin University) and a ‘Staatsexamen' in Pharmacy from the University of Tübingen (Germany) where she graduated in 1995. Her academic background is reflected in her main research interests, which include the isolation and identification of bioactive compounds (particularly from Western Australian Honeys but also from traditional Australian Aboriginal and Asian medicinal plants) and more recently also paediatric formulations. Further, she is interested in complementary and alternative medicines and the notion of medical wellness and its potential in the development of healthy communities. Her PhD research was on the synthesis of small heterocyclic compounds such as isoquinoline derivatives using benzotriazole methodologies.
After teaching at the Northern Territory University, she worked as Lecturer / Senior Lecturer in the School of Pharmacy at Curtin University from 2001 until the end of 2009 when she was appointed as Associate Professor in Medicinal Chemistry in the Pharmacy Program of UWA’s School of Medicine and Pharmacology (now School of Allied Health).

Dr Locher is responsible for the teaching of Medicinal and Pharmaceutical Chemistry in UWA's Master of Pharmacy Program. She also coordinates the unit Fundamentals of Research in Pharmacy and contributes to a number of other units in the course.

Dr Locher’s research interests focus on natural product chemistry, in particular on the isolation and structural characterisation of bioactive compounds from Western Australian honeys as well as traditional Aboriginal and Asian medicinal plants. Recent projects include the analysis of Western Australian honeys by High Performance Thin Layer Chromatography (HPTLC) under the umbrella of the CRC for Honey Bee Products, the phytochemical investigation of various Eucalyptus kinos, Conkerberry (Carissa lanceolata) and Snake Vine (Tinospora smilacina), Kiwi fruits (Actinidia ssp.) and Turmeric (Curcuma longa). More recently she has also started to work in the area of paediatric formulations as a member of the Centre for Optimisation of Medicines. Dr Locher is also interested in the notion of wellness in the broader context of alternative and complementary medicines as well as the establishment of health regions and the interplay of health and mobility.

Dr Locher is currently strongly involved in the Cooperative Research Centre for Honey Bee Products (CRC HBP), in particular Program 2, where she coordinates a number of projects. Fore more information on the CRC HBP see http://www.crchoneybeeproducts.com/.

Accuracy of tablet splitting and liquid measurements: an examination of who, what and how

Project 12 - Development of honey bee products from a biodiversity hotspot

Excellence and Innovation in Teaching Award