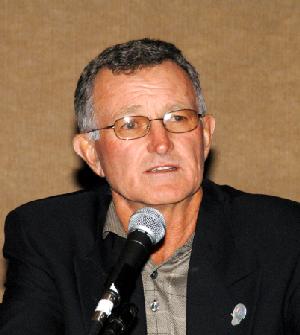 Professor Elliott is the senior biomechanist and Head of the School of Sport Science, Exercise and Health at the University of Western Australia. He has a keen interest in performance optimization and injury reduction in sport having published over 180 refereed articles, 80 refereed conference proceedings, along with 50 books or book chapters on these topics. He has currently supervised 44 Honours, 18 Masters and 16 PhD students to completion of their theses. He is an editorial board member of Sports Biomechanics (USA), Journal of Applied Biomechanics (USA), Journal of Sports Sciences (UK) and the International Journal of Sport and Health Sciences (Japan).
Furthermore Professor Elliott is a much sought-after international speaker on the application of biomechanics to sport. He was the Keynote speaker at the 1st World Congress on Racket Sports, the 1st World Congress of Cricket and the 3rd World Congress of Medicine and Science in Tennis. He was honored by the International Society of Biomechanics in Sports by being asked to give their Geoffrey Dyson Lecture, has been made a fellow of that organization and was their President from 2003-5. Similarly he has delivered the Refshauge Lecture for Sports Medicine Australia, and he was a fellow of that organization. He gave the Frank Cotton Memorial Lecture at the 3rd Australian Association of Exercise and Sports Science Conference (2008) and he also served as their inaugural Vice-President (sport science). He has been a Keynote speaker at each International Tennis Federation Conference from 2001 - 2007 (Thailand – 2001; Portugal – 2003; Turkey 2005; Paraguay – 2007). He is also one of very few international fellows of the American Academy of Kinesiology and Physical Education.
He was the inaugural chair of the Western Australian Institute of Sport (1984-1994) and served as the Scientific Chair for the 5th IOC World Congress on Sport Sciences and supervised the research projects at the Sydney 2000 Olympics. In 1999 he was honoured with the Award of Merit by the Western Australian Sports Federation and in 2003 the Professional Tennis Registry gave him the Stanley Plagenhoef Sport Science Award for “his lifetime contribution to tennis” and the Australian Government awarded him their Centenary Medal for “service to sport policy and research development for sport”. In 2006 the University of Western Australia presented him with an Excellence in Research Supervision Award, for his supervision of Honours students, which was followed in 2008 with an Excellence in Teaching Award.

Within the above context; changes with growth and between male and female populations.

Professor of Biomechanics, The University of Western Australia

The influence of upper-body mechanics, anthropometry and isokinetic strength on performance in wrist-spin cricket bowling

Understanding the Link Between Muscle Mechanics and Energetics in vivo: Integrating Empirical Data and Musculoskeletal Modelling